Researchers from IDIAPJGol, CEEISCAT and IGTP have confirmed the effectiveness of a strategy to improve the early detection of HIV in Primary Care. 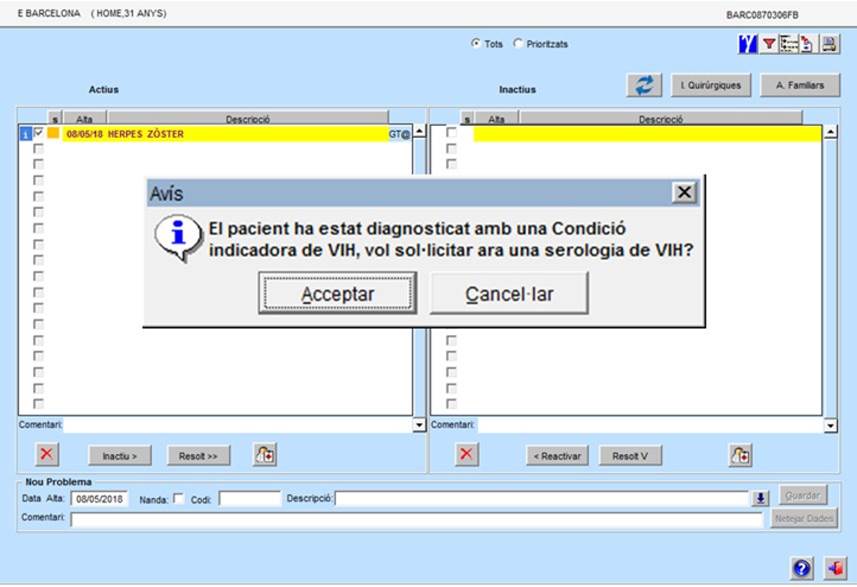 Implementing an electronic alert in Primary Care consultations would make it possible to increase HIV testing and diagnose infections early. This has been confirmed in the clinical trial carried out by the Jordi Gol i Gurina University Institute for Research in Primary Health Care (IDIAPJGol), the Center for Epidemiological Studies on STIs and AIDS of Catalonia (CEEISCAT) and the Institute of Germans Trias i Pujol Research (IGTP), with the collaboration of the Catalan Society of Family and Community Medicine (CAMFiC) and the Association of Family and Community Nursing of Catalonia (AIFiCC) that have just presented the results at the international HepHIV congress. The research project has been funded by the Catalan Health Department through the PERIS 2016 call and ViiV Healthcare.

The trial began in 2018 with the aim of improving the early diagnosis of HIV in primary care consultations. The study has implemented an electronic alert in the computerized medical records of 51 primary care teams in the city of Barcelona so that a pop-up window would appear in the medical records of those patients diagnosed with an HIV-indicating condition.

The HIV indicator status refers to a set of conditions and diseases that are associated with VID or AIDS, or diseases in which the presence of the infection must be ruled out, and that are coded in the computerized medical record . In the pop-up window that appears in the patients' medical records, the physician is suggested to carry out an HIV test to obtain a diagnosis.

To evaluate the impact of this alert, the data of the group in which it has been implemented has been compared with the data of a control group, that is, if the alert. “Thanks to the study, we have been able to verify that the electronic alert is useful to carry out more tests, but, above all, to do it in a more targeted way. The percentage of patients tested is 3% higher than in the control group, but, on the other hand, the percentage of positive tests increases 50% in the alert group ”, explains Jesús Almeda , researcher at IDIAPJGol.

“The early detection of HIV is essential to improve prevention, the prognosis of patients and to reduce the number of cases. Currently, 36% of new HIV diagnoses in Catalonia are late diagnoses, that is, patients have been living with the infection for years without knowing it and without receiving treatment; those who are most affected by diagnostic delay are men over 50 years . Primary care plays an important role as it is the population's gateway to the health system and the implementation of this alert will undoubtedly enable an improvement in the early diagnosis of infection ", explains Cristina Agustí < / strong>, researcher at CEEISCAT and IGTP. “The study has made it possible to determine that the alert is especially effective in men, upper-middle class people, over 50 years of age and with indicator conditions that are not an STD or an AIDS-defining disease, which are diseases and conditions in which less does the doctor think about offering the HIV test. In addition, they are very prevalent, such as seborrheic dermatitis, herpes zoster and mononucleosis-like syndrome ”, Agustí concludes.

Expand the alert to the entire Catalan system

With the data from this study, carried out only in the city of Barcelona, ​​it is necessary to propose the implementation of this indicator alert to the rest of the primary care teams of the Catalan Health Institute (ICS) to improve the early diagnosis of HIV. Late diagnosis not only implies a worse prognosis in the evolution of the infection, higher rates of morbidity and mortality and an increase in the possibilities of transmission to third parties, but also implies an increase in the economic costs derived from patient care. "This intervention should be easily applicable to all ICS primary care centers in Catalonia, since it could be done at a very low cost, almost zero, and the measure would have an impact at all levels," argues Jesús Almeda.