Publication of the study ‘Clinico-epidemiological characteristics of men and women with a new diagnosis of Chronic Obstructive Pulmonary Disease: a database (SIDIAP) study’ in the scientific journal BMC Pulmonary Medicine

The study is the result of the SIDIAP grant won by the Research Group in 2'17 and which allowed access to variables registered in the eCAP of more than 5.5 million users of ICS Primary Care. 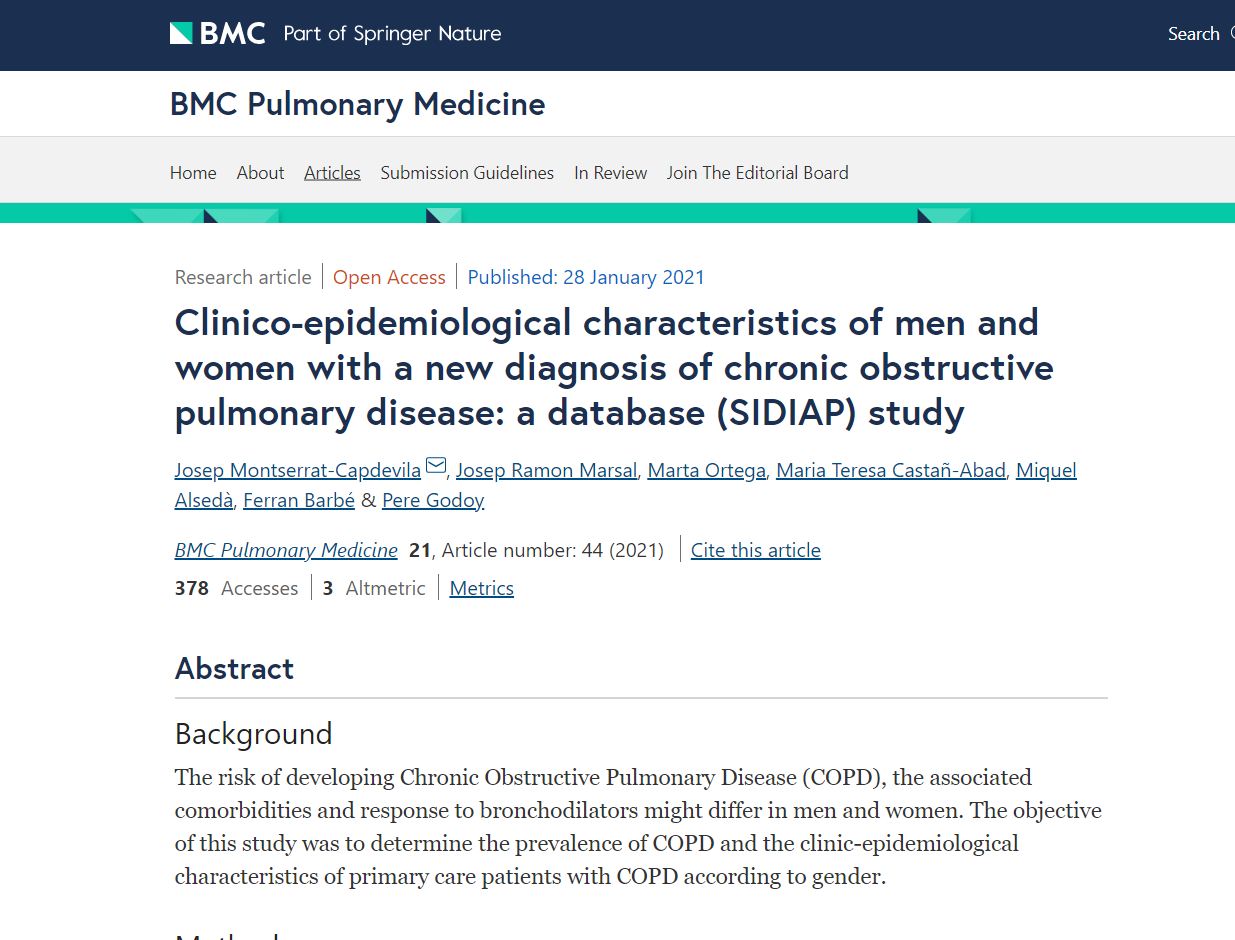 The Lleida doctors Josep Montserrat, head of studies at the Unitat Docent MAFiC Lleida; Maite Castañ, doctor at the CAP de l’Eixample, Marta Ortega, coordinator of the USRLleida-ICS and researcher at IDIAP; Miquel Alsedà, epidemiologist and researcher from IRBLleida; Ferran Barbé, Head of Pneumology at HUAV; Josep Ramon Marsal, researcher at the Vall d'Hebron Cardiovascular Epidemiology Unit and Pere Godoy, head of the Servei de Vigilància Epidemiològica de Salut Pública and researcher at IRBLleida, have published the study Clinico-epidemiologicalcharacteristics of men and womenwith a new diagnosis of ChronicObstructivePulmonaryDisease : a database (SIDIAP) study 'in the scientific journal BMC Pulmonary Medicine.

In this case, the researchers wanted to determine if there were clinical-epidemiological differences, associated comorbidities, and analytical and biomedical parameters among patients diagnosed with MPOC in Primary due to the fact that they were male or female.

A cross-sectional study was designed based on bigdata (SIDIAP) during the period between January 2012 and December 2017. eCAP variables of 5,800,000 users from a total of 279 Primary Care Centers throughout Catalonia and Those variables of interest were collected among the users who met the inclusion criteria. In an initial sample of 800 thousand people, only 3% were patients diagnosed with MPOC, of ​​which 22.9% were women. The risk factors most frequently associated with women were bronchiectasis (ORa = 20.5), age older than 71 years (ORa = 18.8), cor pulmonale (ORa = 5.2) and lung cancer ( ORa = 3.6). The study determined that men and women share similar comorbidities (smoking, alcohol consumption, lung cancer, bronchiectasis, corpulmonale, obstructive sleep apnea syndrome (OSAS), ischemic heart disease, osteoporosis, depressive sd, hypertension, DM2, kidney disease chronic, anemia, atrial fibrillation) but are distinguished in that the strength of association is different in each of the groups. In this case, women turn out to be more susceptible to the harmful effects of tobacco and present at the same time, a higher proportion of bronchioectasia and OSAS.

Knowing the distribution and the strength of association of each comorbidity and risk factor in men and women diagnosed with MPOC allows additional information to be provided to daily clinical practice when identifying those patients with the highest suspicion of suffering from MPOC.

You can read the complete publication in the following link.